Beetles: A Natural Threat to the Canadian Wood Supply

Wood workers love wood and will collect wood from friends and relatives, campsites and any place wood has been abandoned. It is moved to be used as firewood, wood turning and lumber production just to name a few potential uses. The list is endless.

Moving wood can be risky for your wood supply by moving pests to areas that are not already infected.  Everyone must be aware of the area they live and travel in and what is restricted in that area.  Some areas of Canada have signage posted regarding the movement of felled trees and firewood.

A good source of information regarding invading pests and the restrictions associated with them is the Canadian Food Inspection Agency’s website. This agency’s mandate is the control and eradication of any invasive species that may impact Canada’s natural resources.

The Asian Longhorned Beetle infests broadleaf trees such as birch, elm, poplar and willow.  The beetle weakens the integrity of the infested trees over many generations of beetle production, resulting in their eventual death.  Control measures include removing all trees that the beetle will infest within a specific area.

The Asian Longhorned Beetle was first detected in the City of Vaughan, Canada in 2003.  30,000 Trees were removed as part of the effort to eradicate this pest.  Restrictions regarding the movement of wood from within the affected areas to outside the affected areas, was prohibited.

No beetles have been seen in this area since 2007.  On April 5, 2013 the announcement was made, by the Canadian government, that the Asian Longhorned Beetle has been eradicated from Canada. For more details see the press release at Canadian Food Inspection Agency’s website.

The Emerald Ash Borer was accidentally introduced to Canada and the United States in the 1990’s.  It has killed 50 – 100 million ash trees since its detection and threatens to kill all 7.5 million ash trees found in North America.  There are large parts of Ontario and Quebec that are infested by this pest and all ash tree materials and firewood cannot be removed from these areas.

A list of all the regulated areas can be found at the Canadian Food Inspection Agency’s website.

These beetles begin by laying eggs under the bark of a tree. Within a year the needles have turned red and the tree is dead.  In 3 to 4 years there is no foliage left and the trees appear grey.  The beetle spreads its blue stain fungi into the wood as it lays its eggs.  The wood from these trees is still usable for approximately 12 years after the tree dies.

The wood, when milled, has a silvery blue hue that one company is using to make Apple accessories. Check them out at badbeetle.com. 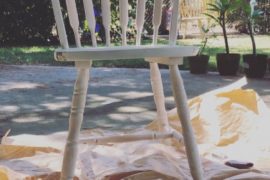 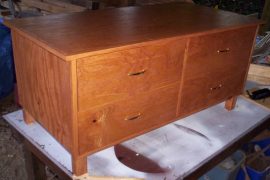 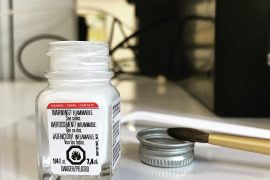